NO! Not THAT one!

I thought I’d share my rare sighting with you.Turns out there is quite a lot of interest in this sort of thing.

I read this blog with great interest.

I decided to report my sighting to Wolverine Watch.

You can find their web site here:

This is exactly what I reported:

I was driving north on highway QC 101, traveling through the Parc national d’Opémican area (I am uncertain of the exact location because I was moving at the time and had an SUV full of personal belongings and my cat; I was running late). I came to a bend in the road, veering to the right. It was very dark. Thick conifer tree cover lined both sides of the road, close to the road. The road seemed more enclosed than other sections. The shoulders appeared soft and level; no guard rails. That’s when I braked because I spotted a dark coloured animal exit the forest on the right (east?) side of the road. It crossed the road in front of me. It did not look at my vehicle and did not appear distracted by my lights. Its focus was solely on the forest cover and it seemed to be really pushing itself to get there. I immediately recognized it as being a wolverine. It quickly ran across the road, entering the forest on the left side (traveling west?). I am a former fisheries biologist, at that time moving to QC to continue my career as a science teacher. I’ve seen a wide variety of wildlife in the field and know for certain I saw a wolverine. I am also autistic and tend to stick to objective facts and avoid tall tales or attempts to draw attention to myself. At the time I saw the animal, I was curiously nonchalant. I felt it was a nice introduction to the wilds of QC – seeing an animal I had never seen before. I thought it was a good sign. I made a mental note to look the population up when I got settled in Val-D Or. Today, I finally did some research and was surprised to find how rare the sighting was. I was unaware of the status of the wolverine in eastern Canada (I lived in the UK for 12 years and was not up to date). Due to the colouration (looked much darker at night, almost black, but could see some lighter browns), length, length of legs (distance up off ground), body shape, and movement of the animal (somewhat similar to a badger) I know it was a wolverine that I saw.

Yet Another Odd Habit of Mine

In retrospect, I have a bizarre habit of finding odd species that don’t belong (kind of like ME!).

For example, in the late seventies, I found four or five extremely large insects at the bottom of a chestnut tree, just down the street from my house. They were dark brown in colouration and were either dead or near death. They remained there for a couple of days, before completely disappearing. We wanted to collect them, but my father (that fountain of entomological knowledge) said to stay away from them. To this day, I wonder what they were and how they got to a sleepy street in Goderich, Ontario, Canada. Recently, I saw troubling reports of “giant wasps” and “murder wasps” in the press (that fountain of entomological knowledge). The pictures reminded me of what I saw back in the seventies, except some did not look at all like wasps. I have no idea what type of insect they were, but they were large like praying mantises; some had long, thick antennae. To this day, I have never seen anything like it. Where on Earth did they come from? They looked tropical – like something out of the jungle. I can only assume that someone on my street – possibly collecting them during a trip abroad – tossed them out, cementing their sluggish demise in Goderich’s hostile climate (a fate I narrowly avoided myself). How else could I explain why two or three types of highly unusual giant bugs were all together, near death, below a single tree – on Park Street?

In another bought of nascent cryptozoology, I discovered a species that everyone claimed could not and did not exist.

One summer at Como Lake, northern Ontario, I drove the owner crazy with questions about walleyes. I’d seen lots of rice weed and thought the habit was perfect for them. He kept insisting that there were no walleye in the lake. He added that the Ministry of Natural Resources (MNR) released some, but they all died; apparently, because the water was “too clear and pure for them”. At one point, he implored me to stop mentioning “walleye”; he was genuinely angry! Yet, I caught one – a big one! I still recall the look on his face when he came down to the dock (a crowd had gathered) to see what I had caught. The picture of me and that walleye remained on the wall in his camp for years and years. He even mentioned it in his autobiography! Nowadays, their presence is widely known, even advertised on the resort’s web site.

Continuing my knack for finding weird stuff, I’ve caught black crappie in my beloved Maitland River, where they aren’t supposed to be.

One summer, back in 2000, I was shocked to see a large black bear in the distance, as I hiked along a local rail trail. At that time, there were no confirmed sightings of bears in my area; they had long since been killed off / pushed out, as forest surrendered to farmland. Nowadays, their presence is widely known; they are often spotted and photographed.

Lastly, a contentious issue: wolves are rumoured to live in around my old stomping grounds. Local farmers, always in the mood for a good antigovernment conspiracy theory, believed the MNR released them to help control the deer population. They hear them howling at night and fear for their livestock. Heard not seen – that is always the case (was always the case). I think you know where this is heading! 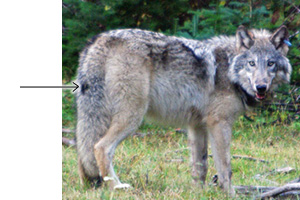 Last summer, I was hiking along the Maitland River. A few twigs snapping in the distance drew my attention away from the trail. I paused to scan the area. After a minute or two, I saw the hindquarter of what I believed was a wolf, moving silently through very thick cedar cover, atop a slope. I was alone at the time and justifiably alarmed – even terrified; but, at the same time, this solidified my reputation as a diviner of the weird and unusual – a man who is ahead of the curve, through no fault of his own.

“Wolverine in Skansen” by existential hero is licensed under CC BY-NC 2.0

“Wolverine” by Monja · con · patines is licensed under CC BY-NC-ND 2.0