I understand there’s been a lot of discussion and speculation regarding what Mother! is about. For me, having just watched it on DVD, it is perfectly obvious that the film portrays the troubled marriage between Christianity and Mother Nature. In the film, God (Javier Bardem) is a self-absorbed poet who quickly – proudly – writes the bible and gathers overzealous followers while Mother Nature (Jennifer Lawrence) is neglected, ignored and made to suffer, despite the fact that she is always working in the background. Along the way, there are allusions to Adam and Eve (in particular the “apple”), Cain and Abel and the seven deadly sins. 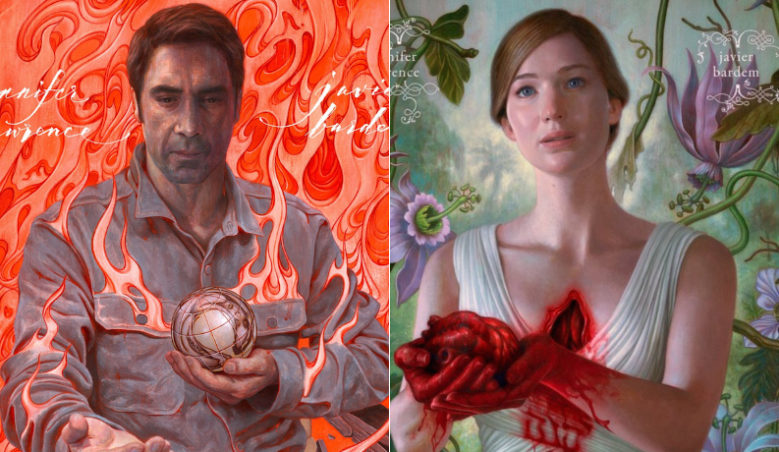 The film is very effective, although a bit too obvious at times, as it sets about clearly demonstrating how Christianity has lead to widespread, thoughtless and ultimately self-destructive environmental devastation. In particular, the film portrays humans (God’s creations, and intruders in Mother Nature’s home) as above nature, detached from nature, conquers of nature and beyond reproach. This is demonstrated in the horrible way that God’s “guests” treat and speak to Mother Nature, and the complete lack of respect they have for the home she is working so hard on. Nature, on the other hand, is portrayed as dark, foul and disturbingly mysterious; it is something to be immediately changed according to human needs and whims. For example, some guests suddenly start painting the house while others lounge and roam wherever they like. Emphasis is placed on receiving immediate forgiveness for any sins against nature; God continually defends the guests’ actions, while Mother Nature can’t believe what she is hearing. Having worked in the environmental sector for eight years, and studied culture and environment as part of my Master’s degree, I know that Christianity has a lot to answer for when it comes to caring for the environment.

As you can tell, thoughts and reflections flooded in, as I watched the film, despite being under duress. I had to return the DVD before the local library closed. I kept checking the time on the DVD player and then glancing up at the clock; I was cutting it close. I kept thinking to myself that if I didn’t start to get into it, I could turn it off and return it before I received a fine; I wouldn’t miss a thing. However, I stuck with it. I got the feeling that Aronofsky was going for a Buñuel -style social satire with deep religious undertones (bringing to mind Viridiana and The Exterminating Angel, in particular). While I could see some similarities in intent, Aronofsky’s approach was much more obvious and at times over-wrought; he lacks Buñuel’s subtle, dreamlike intertwining of reality and surreality.

At times, I lost patience with the film, but was compelled to keep watching. As an autistic person, I found the sound design frustrating – even painful. That high pitch whine occurring whenever Mother Nature takes her yellow “painkiller” sent me diving for the volume control – in fact, I almost stopped watching. I believe the repeated consumption of yellow substance, coupled with the noise pollution, was meant to symbolize the slow poisoning of nature brought on by the arrival of more and more uncaring guests. Despite challenging both my senses and my patience, the film slowly drew me in and did something rare for a film these days – it made me think. While watching, I was making all sorts of connections and comparisons, theories and conclusions, as I worked to figure out the director’s intentions – which slowly revealed themselves.

Without giving too much away, I found the ending deeply satisfying. History forever repeats itself and God, much like his foolhardy creations, does not learn from his mistakes. Over all, I thought the film was essentially a darkly surreal, Reader’s Digest version of the Bible. The fact that I felt passionately impelled to write something about Mother! immediately after watching it really says something – and, incidentally, the DVD was retuned on time.